Tuesday last week the Partnership Agreement between University of Tartu and University of Stavanger was signed by Department of Health Studies' Head of Department Kari Vevatne, on behalf of the University of Stavanger. The 32 page document, which I had gone through with a research consultant at the university (we had a meeting October 15th) and signed with my initials page by page so as to confirm that I vouch for it, was then posted to Tartu. The contract regulates the research collaboration involved in the project "Animals in Changing Environments: Cultural Mediation and Semiotic Analysis".

As part of the project work - where I'm the Norwegian project leader - I will be employed in a 10% position from March 15th 2014 to April 30th 2016. During my meeting with my Head of Department she also confirmed that I'll get a shared office in the project period (starting next summer, until then I have my own office, based on my current employment contract).
Posted by Morten Tønnessen at 13:01 No comments:

The Norwegian Human-Animal Studies anthology Hvem er villest i landet her? Råskap mot dyr og natur i antropocen, menneskets tidsalder [Who is wildest in this country here? Brutality towards animals and nature in the Anthropocene, the age of Man], for which I am one of three editors, is being sold by NOAH - for dyrs rettigheter (NOAH - for animal rights), a Norwegian animal rights NGO, in their webshop.

The Norwegian Human-Animal Studies anthology Hvem er villest i landet her? Råskap mot dyr og natur i antropocen, menneskets tidsalder [Who is wildest in this country here? Brutality towards animals and nature in the Anthropocene, the age of Man], for which I am one of three editors, is mentioned in newsletter no. 18, 2013 of the Norwegian animal welfare NGO Dyrevernalliansen (Norwegian Animal Protection Alliance). The book is mentioned as one of three recommended titled published this year. Dyrevernalliansen has some 5.000 members.
Posted by Morten Tønnessen at 12:41 No comments:

Yesterday I revised my forthcoming article "Statistikerens guide til utopia II: En demografisk analyse av øko-visjoner om befolkningsnedgang i det tredje årtusen" [The statistician's guide to utopia II: A demographic analysis of eco-visions of population decline in the third millennium]. Among other things I added six figures, one for each table.

Posted by Morten Tønnessen at 04:58 No comments:

Yesterday I blogged in the blog of Minding Animals Norway, with a post entitled "Ordvalg – en kritisk lesning av omtalen av dyr i norske partiprogrammer" [Word choice/election - a critical reading of the mention of animals in Norwegian political programs]. 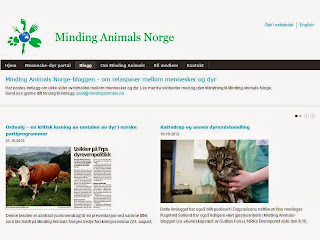 Posted by Morten Tønnessen at 04:46 No comments:

This Wednesday I gave the guest lecture "Menneskeveldet - menneskets globale økologiske hierarki" in the course in eco-global criminology offered by University of Oslo's Department of criminology and sociology of law. Some 15 people were present.
Posted by Morten Tønnessen at 12:00 No comments:

Lecture given in Lund, at Centre for Cognitive Semiotics

This Thursday I presented "The ontogeny of the embryonic, fetal and infant human Umwelt" in the research seminar at Lund University's Centre for cognitive semiotics (2 hours). Some 10-12 people were present.
Posted by Morten Tønnessen at 11:51 No comments:

Minding Animals Norway has posted an overview of reviews, debate etc. in the wake of the publication of the Norwegian Human-Animal Studies anthology Hvem er villest i landet her? Råskap mot dyr og natur i antropocen, menneskets tidsalder [Who is wildest in this country here? Brutality towards animals and nature in the Anthropocene, the age of Man] - see here. The overview includes mention of (and for the most part links to) no less than twelve media texts/appearances.

See also:
Spartacus:Facsimiles of media coverage of HAS anthology

Posted by Morten Tønnessen at 06:34 No comments:

Minding Animals Norway is selling the Norwegian Human-Animal Studies anthology Hvem er villest i landet her? Råskap mot dyr og natur i antropocen, menneskets tidsalder [Who is wildest in this country here? Brutality towards animals and nature in the Anthropocene, the age of Man] - see here. About 100 NOK per book sold by MAN goes to MAN itself.
Posted by Morten Tønnessen at 06:23 No comments:

Interest in being member of national committee for research ethics

In response to an open call, I have signalled my interest in being appointed as a member of one of the three National Committees for Research Ethics in Norway ("Forskningsetiske komiteer"). Members of new committees for the period 2014-2017 will be appointed this autumn by the Ministry of Education and Research, based on recommendations from the Research Council of Norway. All three committees seek philosophers with competence in ethics.
Posted by Morten Tønnessen at 06:18 No comments:

Yesterday I taught for 5 1/2 hours in the master course "Vitenskapsfilosofi og etikk" [Philosophy of science and ethics]. The whole day was devoted to student presentations of anthology chapters, so my role was mostly as a commentator and chair, but I also stepped in giving two presentations (one on Hume's ethics and another on Kant/Singer) where students had cancelled.
Posted by Morten Tønnessen at 11:18 No comments:

The Norwegian language homepage of the research project "Animals in changing environments: Cultural mediation and semiotic analysis" has now been launched. 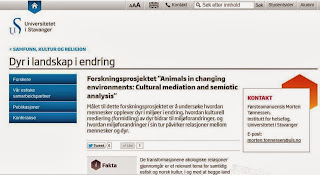 See also:
The research project "Animals in changing environments"launches website [in English]
Posted by Morten Tønnessen at 10:57 No comments:

This abstract has, some three days back, been submitted to the conference Framing Nature: Signs, Stories, and Ecologies of Meaning (The European Association for the Study of Literature, Culture, and the Environment (EASLCE) biennial conference), to be held in Tartu, Estonia, April 29th - May 3rd 2014:

Inspired by Stibbe 2012, this paper presents the main findings of a simple linguistic study of the programs for the parliamentary term 2013-2017 of Norway’s nine biggest political parties. The corpus consists of 12 programs, since three of the parties operate with two programs, one focused on principles and the other on more practical questions. The study is divided into two parts, a word/morpheme frequency study, involving 23 entries with altogether 28 search terms (including “dyr” [animal], “dyreetikk” [animal ethics], “dyrevelferd” [animal welfare], “fisk” [fish], “fugl” [bird]), “rovdyr” [predator(s)] and a number of common animals) and a morpheme occurrence study. The latter results in complete overviews over the vocabulary applied in these political programs containing the morphemes “dyr” [animal], “rein” [reindeer] and “fisk” [fish].

The findings of the second part of the analysis show that the three mentioned morphemes are often included in wordings that imply a systematic omission of basic aspects of animal life and behaviour. In particular, the morphemes “fisk” [fish] and “rein” [reindeer] are predominantly, in fact almost exclusively, to be found in conceptual structures that constitute an objectification of animals, usually by reducing them to economic resources. This observation is consistent with one of the findings of the first part of the study, namely that “fisk” [fish], which is economically important in Norway, is mentioned some 300 times altogether in the corpus, whereas “fugl” [bird] is mentioned only 3 times. Even when applied as a word, “fisk” [fish] rarely refers to fish as living, sentient beings, but most often rather to fish products and governmental management of fisheries.

There are a few instances of statements connecting animal welfare and the like to the fishy vocabulary, but there is otherwise little correlation between the positive statements about animal ethics etc. on the one hand and the use of language whenever animals are mentioned elsewhere in the party programs on the other. The analysis thus shows that the choices of words that have been made in formulating the parties' policies for this parliamentary term in sum reveal a deep-seated anthropocentrism which stands in direct contrast to the good intentions, officially shared by several of the analyzed parties, of getting animal ethics higher up on the political agenda.

Posted by Morten Tønnessen at 08:04 No comments: