I now have a profile ("file") at IDEAS (Department of Economics, University of Connecticut).

The statistician's guide to Utopia: The future of growth, published in TRAMES in 2008, is now featured on MPRA (abstract, references). The full pdf paper is registered as MPRA paper no. 19644.

I have registered at the RePEc author service, which ties economists in to its bibliographical database. All RePEc material (articles, books, work papers etc.) is freely available - not just to registered users.

In the same process, I have registered the University of Tartu Faculty of Philosophy at RePEc - and I am making The statistician's guide to Utopia I: The future of growth available through the Munich Personal RePEc Archive (MPRA) (and in effect EconPapers).
Posted by Morten Tønnessen at 05:06 No comments:

Signs Grow - But Should They? Semioethics and the Dominant Semiosis of Homo sapiens sapiens

Tell me, where is Morality Bred? The Semioethics Interviews I, with John Deely
Posted by Morten Tønnessen at 06:00 No comments:

I have compiled (and designed) a pdf-file envoloping all blog posts published in Utopian Realism in 2009 (up to December 20th or so), numbering 104 all in all, over 94 pages.

Besides being available for download online, it appears on 20 copies of a bonus CD accompanying "Kardemomme Tidende" no. 18 (volume 13), December 2009.

Cf. a similar post in my political, Norwegian language blog Utopisk Realisme.
Posted by Morten Tønnessen at 07:16 No comments:

I am about to submit a proposal for a paper for the 60th congress of the The World Institute for Advanced Phenomenological Research (The 60th International Congress of Phenomenology), to be arranged in Bergen, Norway, next August.

Semiotics of Being and Uexküllian Phenomenology

Posted by Morten Tønnessen at 05:46 No comments:

My submission to the 8th annual meeting of the Nordic Society for Phenomenology (NOSP) was rejected (the organizers note that they received a large amount of proposals). A pity. It is now uncertain whether or not I will participate.
Posted by Morten Tønnessen at 05:40 No comments:

Final title: "Abstraction, cruelty and other aspects of animal play (exemplified by the playfulness of Muki and Maluca)"

I have arranged tickets for visiting Estonia (Tartu) January 24th to 28th (Sunday to Thursday).
Posted by Morten Tønnessen at 09:25 No comments:

The festschrift contribution of me and Dinda Gorlee, now entitled "Da Lotman og semiotikken kom til Norge" (When Lotman and semiotics came to Norway), has been finished and submitted to the editors.
Posted by Morten Tønnessen at 05:37 No comments:

I have previously mentioned the UiA Philosophy Forum (Filosofisk Forum) - see here, and here. Today the committee of the forum gathered for the second time. We have made a draft of the spring programme, which looks more or less like this:

In addition, there will be a course session in "philosophical dialogue" (filosofisk samtale) - in preparation of the February dialogue and the public event in March - February 2nd.

While events 1, 2 and 4 are "internal" (university area) events - though open to all - the 3rd and 5th event will take place outside of campus, and aim at engaging a wider audience, in each their way (strictly speaking, this may apply to event 3 more than to event 5, which will nevertheless be made available for a general audience). The methodology for the dialogic events has in the Norwegian context been further developed by amongst others Øyvind Olsholt.

Besides talking at event 1, I will coordinate contacts for event 3, where we hope to gather individuals from different faiths etc. - protestants, catholics, muslims, agnostics and atheists - for a common philosophical dialogue.
Posted by Morten Tønnessen at 07:33 No comments:

The work title for my article-in-progress for the forthcoming anthology Environment, Embodiment and History, edited by Johannes Servan and Ane Faugstad Aarø, is:
I, Wolf:
The Ecology of Experience
Posted by Morten Tønnessen at 07:34 No comments:

Invitation to contribute to book by Nova Publishers

I have received an email from Nova Science Publishers (signed by editor-in-chief Frank Columbus) in which I am invited to contribute to a book entitled "Semiotics: Theory and applications". They previously published 2 issues of "Journal of Biosemiotics".
Posted by Morten Tønnessen at 00:27 1 comment: 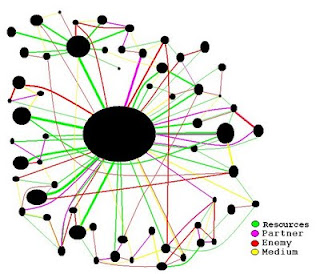 Today, at 2-4, I presented "Expanding horizons: Interdisciplinary integration", previously entitled "Methodological challenges in analyzing wolf ecology and wolf management within a semiotic-phenomenological framework" (a 30 min talk, accompanying Timo Maran's "Zoosemiotics: Disciplinary identity and methodological perspectives" (a good overview, with historical perspective)). The occasion was a seminar called "Methodology of the humanities", at University of Tartu (led by Peeter Torop).

Above: Sketch of a global ontological map (humankind in the center).
Posted by Morten Tønnessen at 11:46 No comments:

Lotman piece to be co-written by Dinda L. Gorlée

I have agreed with Dinda L. Gorlée (the Netherlands) that we will cowrite my (now our) aforementioned 2 pp contribution to a Norwegian-Estonian Festschrift, due for next spring. She was a central figure in Norwegian semiotics in the mid-1980s - the only time (so far) semiotics has flourished much in Norway.
Posted by Morten Tønnessen at 11:27 No comments: