Later this afternoon (at 17.30-19.30), at the sixth ESEH conference in environmental history, in Turku, Finland, I will participate in the regional panel "Never cry wolf. Human-predator interactions", along with Karin Dirke (of Sweden), Tomasz Samojlik (of Poland) and a replacement for Jukka Bisi (Finland). The panel is chaired and organized by Turku biologist Timo Vuorisalo, and is one of two parallel regional sessions this afternoon.

The topical presentation (to be found in the conference's hand programme) of the panel reads:

It is probable that human attitudes towards large avian or mammalian predators have been ambivalent since prehistoric times: predators have simultaneously been both admired and revered for their audacity and strength, and maligned as competitors or even predators of man. Some species such as the Gray Wolf, Lion and Tiger continue to have a significant role in folklore and popular culture. A diverse literature exists on the impacts of predators on society, the types of predator folklore and human attitudes towards predators in different parts of the world. Management of predator populations and their conservation remain a source of serious controversy even in post-industrial societies.

Posted by Morten Tønnessen at 02:26 No comments:

Here at the 6th conference of the European Society for Environmental history in Turku, Finland a hand programme with abstracts has been handed out to all participants. It is also available for download online.

I am mentioned three places (though only two are listed in the index, p. 249):
- p. 26: as a session organizer and presenter in the session "Animal agency and environmental history - three different approaches to Nordic wolves" (29/6)
- p. 44: as one of the panelists in the regional panel "Never cry wolf. Human-predator interactions" (30/6)
- p. 154: with the abstract to my talk mentioned on p. 26 "Wolf history: Agents in hiding"

Posted by Morten Tønnessen at 02:15 No comments:

Yesterday I presented my paper "Wolf history: Agents in hiding" here at the 6th conference of the European Society for Environmental History ("Encounters of Sea and Land" - Turku, Finland), where there are close to 300 participants and some 240 presentations. The presentation was the first of three in the session "Animal agency and history - three different approaches to Nordic wolves", initiated by Håkon Stokland and attended by around 15 people. I enjoyed both of the two other papers, by Heta Lähdesmäki and Karin Dirke.
Posted by Morten Tønnessen at 02:08 No comments:

The 5th Bulletin of Minding Animals International, where my participation in MA Oslo (as an organizer) and MA Uppsala (as a speaker) is mentioned, has been uploaded to the webpage of FAO, The United Nations' Food and Agriculture Organization.
Posted by Morten Tønnessen at 02:01 No comments:

The summary of the workshop The history, philosophy and future of ethology (Sydney, Feb. 2011), earlier published in the March News Bulletin of the Australian Animal Studies Group, is also available at the homepage of Ecological humanities, along with a sample of post-conference appraisals.
Posted by Morten Tønnessen at 01:57 No comments:

A short bibliography in zoosemiotics

We the researchers of the project Dynamical zoosemiotics and animal representations have compiled and made available A short bibliography in zoosemiotics (8 pages).
Posted by Morten Tønnessen at 01:51 No comments:

Saturday June 25th I presented my paper "Integrated biological individualism and the primacy of the individual level of biological organization" at the 11th gathering in biosemiotics, in New York City.

The powerpoint is uploaded to Academia.edu (videos not included - for some, see my account on YouTube).
Posted by Morten Tønnessen at 04:37 No comments:

My article "Semiotics of being and Uexküllian phenomenology" is about to be published as a chapter in the forthcoming volume 110 of Analecta Husserliana. I only got to see an email about its proof-reading this afternoon (I had not received any notice about the acceptance of my text for publication). The book is scheduled for publication already in August.

At 14 pages, my text summarizes my notions of 'semiotics of being' and 'Uexküllian phenomenology' and relates them among other things to Anna-Teresa Tymieniecka's 'phenomenology of life', Peter-Wessel Zapffe's 'biosophy', the eco-phenomenologies of David Abram and Ted Toadvine and the 'Phaneroscopy' of Charles Sanders Peirce.

"If we believe that eco-phenomenology, or environmental philosophy in general, is all about human perceptions, we commit a categorical mistake, and miss out on the heart of the matter."

The title of Analecta Husserliana vol. 110 (CX) is Phenomenology/Ontopoiesis Retrieving Geo-Cosmic Horizons of Antiquity, and it is as always edited by A.-T. Tymieniecka. My contribution has been placed as chapter 27, in section VI, "Nature, World, Continuity", along with chapters by Francesco Totaro, Sibel Oktar and Catia Giaconi.

NATURE AND ARTIFICE IN MANIFESTING/PRODUCING THE BEING
Francesco Totaro

THE PLACE: WHERE WE SEE THE WORLD AS A LIMITED WHOLE
Sibel Oktar

Posted by Morten Tønnessen at 10:33 No comments:

Talk scheduled for conference on carnivores and grazing livestock

I have agreed to give a talk at this year's Den nasjonale konferansen om rovvilt, beitedyr og samfunn [The national conference on predators, grazing livestock and society] (Hamar, Norway, Oct. 31 - Nov. 1). Last year there were 120 attendants.

My talk will be entitled "Offisiell og 'uoffisiell' rovviltforvaltning i Norge sett med et humanøkologisk blikk - Hva er motivene og handlingene?" [Official and "unofficial" predator management in Norway, as seen in a human ecology perspective - What are the motives and actions?].

The talk has been scheduled for 40 minutes. I have been asked to address the topic of illegal wolf hunting, and will also present my general analysis of cultural symbolism in the Norwegian wolf/sheep strife.
Posted by Morten Tønnessen at 05:34 No comments:

Tonight at around 3 a.m. the negotiations involving all political parties represented in the Norwegian parliament, which had been aiming to reach a new carnivore settlement replacing that of 2004 (effective from 2005), ended without results. The negotiations were supposed to conclude before Christmas 2010. After several delays, and critique from the opposition for the coalition government's lack of any joint proposal, it was said that the negotiations would conclude before the parliament's summer break. Instead, the negotiations are now over. And after a year or so of conflicting expectations and promises, there is no policy review whatsoever. Nada. There will be no deal. It is totally uncertain as of today when a new attempt will be made - perhaps in a couple of years, when Sweden moves on with their policy review. In the meantime everything is as it was - except that nobody wants it to stay like it is - a status quo that benefits neither carnivores nor farmers nor sheep. In this particular case stasis - inaction - is not an acceptable compromise, but an outright failure to deal with this whole problematique.

Norwegian wolf management is my PhD case study. I am covering historical times before and after the wolf got status as protected species, plus contemporary times (2006-2011).

Posted by Morten Tønnessen at 06:25 No comments:

Radio - comments on the vulnerability of our modern monetary economy

As announced yesterday, I appeared on NRK P1 Sørlandet, a public regional Norwegian radio channel, this morning, concerning a bank strike which eventually did not materialize. Nevertheless June 6th - yesterday - was a historical day, as Norwegians have never withdrawn as much cash as yesterday on one and the same day. My perspective on a possible bank strike was threefold:

a) how we have come to depend on our monetary economy, and in effect spread this dependence globally through our development/aid policy (because we regard cultures without monetary economy as uncivilized)
b) how people deal with such modern shocks, being creative when in need (though such flexibility is more achievable in many 'less developed' economies, which are, ironically, less vulnerable in this respect)
c) the ways in which a contemporary bank strike would hit society compared to earlier bank strikes (e.g. 1976), illustrating our increased dependence on monetary economy and technology in our modern economy of scale

I was introduced as philosopher with master (hovedfag) in philosophy and a PhD underway in semiotics.
Posted by Morten Tønnessen at 23:33 No comments:

Tomorrow at 7.40 a.m. Norwegian time I will be on NRK Sørlandet radio commenting the bank strike that might start tomorrow morning, from a philosophical perspective. Here's a link to online streaming of this regional radio channel. I will be appearing courtesy of Spør Filosofen (Ask the philosopher).
Posted by Morten Tønnessen at 04:31 No comments:

Here's the editorial mention of my chapter "Mapping human impact - expanding horizons: Interdisciplinary integration" (cf. previous post), which is to be found on p. 15 in Tiina Peil's Introduction (pp. 11-17):

The Umwelt approach is further examined by Morten Tønnessen who continues with a phenomenological reading of Jakob Uexküll's work. He attempts to create means to qualify quantitative data and discuss the merits and shortcomings of two methodologies - the ecological footprint and the ontological niche - in investigating (mapping) the human role in nature.

Posted by Morten Tønnessen at 09:03 No comments: 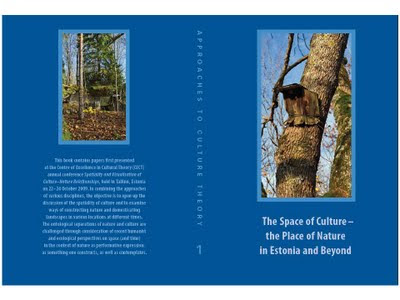 My book chapter "Mapping Human Impact – Expanding Horizons: Interdisciplinary Integration" features as chapter 5, pp. 93-106 in the now published The Space of Culture - the Place of Nature In Estonia and Beyond. This book is the very first volume in Tartu University Press' new book series Approaches to Cultural Theory.

My contribution has been placed in the book's second section, "Constructing Nature", along with contributions from Maaris Raudsepp and Kirsi Laurén. Other contributors to the volume include Roland Posner ("Eight historical paradigms of the human sciences"), Kalevi Kull ("Foundations for ecosemiotic deep ecology") and Mats Widgren ("A world of domesticated landscapes"), among others.
Posted by Morten Tønnessen at 11:27 No comments:

Philosophy business: In minus

Yesterday I had to do my tax returns report (in Norwegian: selvangivelse). Since I am registered with a private (personal, actually) commercial company, Spør Filosofen ("Ask the Philosopher"), I simultaneously calculated the revenues, costs and profits (sic) of my company.

Costs included maintaining a webpage, travel and accommodation in relation to promo-meetings, and advertising on Facebook and Google. Revenues originated from two assignments locally (in the Kristiansand area), one being a talk on the future of the global growth economy, the other a lecture and more for an international group of (exchange) students.

Some day I'll be rich. No kidding.
Posted by Morten Tønnessen at 12:39 No comments:

The last week or so we have made progress getting the program for our forthcoming Oslo Minding Animals event in place. We have all four speakers confirmed - but since two of them are conditional on a successful funding application, which will be decided in two weeks time, we are not quite ready to go public with all the names yet.
Posted by Morten Tønnessen at 12:36 No comments:

I am reading the English translation of Edmund Husserl's The Crisis of European Sciences and Transcendental Phenomenology.

The strangest thing has happened this spring: I have started to understand Husserl (and Heidegger, and Merleau-Ponty). Never had such an uncanny feeling before.
Posted by Morten Tønnessen at 12:32 No comments:

Deadline for submission of research papers (final essays) in my intensive course Semiotics and Phenomenology was May 31st. I have received three papers and am waiting for one more (plus a fifth paper which will not be graded, later on). I have promised to grade these papers by June 10th (that is, ahead of my departure for 'America').
Posted by Morten Tønnessen at 12:29 No comments:

Deadline for submission of full-length papers to our edited collection The Semiotics of Animal Representations was May 31st. Still waiting for a couple of papers, in my half. According to our time schedule Kadri Tüür and I will give the required feedback to all contributors by July 15th at the latest.
Posted by Morten Tønnessen at 12:26 No comments:

I applied for a travel grant for the upcoming European conference in environmental history, to be arranged in Turku June 28 - July 2nd, but did not get it - likely because they had numerous candidates from poorer countries than Norway (sic).
Posted by Morten Tønnessen at 12:22 No comments: