See also: "Links to CRIStin 2012 results and profile page"
Posted by Morten Tønnessen at 11:21 No comments:

Some two weeks ago I was informed that my abstract "The ontogeny of the embryonic, fetal and infant human Umwelt" has been accepted for presentation at the 8th conference of the Nordic Association for Semiotic Studies, Sign Evolution on Multiple Time Scales (Aalborg, Denmark, May 29-31).
Posted by Morten Tønnessen at 11:10 No comments:

A few days back I received a letter from NAV, the Norwegian Labour and Welfare Administration, informing me that my application for parental leave in the period January 1st to June 24th 2013 has been accepted. As noted earlier in this blog, I am on 80 % leave combined with 20 % workload. The answer from NAV came almost 3 months into my parental leave, and they had not paid me a penny until now - meaning they had in effect been owing me money for some 3 months. This whole story has been outrageous, and caused me a lot of concern and worries.

As if this wasn't enough, NAV has now sent my wife a letter where they seem to have misunderstood their own rules ... but enough about that.
Posted by Morten Tønnessen at 11:00 No comments:

The last couple of weeks I have conducted revision of the course descriptions of three courses at University of Stavanger's Department of Health Studies:
Among the changes: Class-based group work in SVEXPHIL; some English-language anthology texts replaced by Norwegian introductions to ethics and to philosophy of science in MHV140, and in the same subject compulsory group presentations of the selected anthology texts.

The number of students in each of these courses is about 30, 50 and 210 respectively.
Posted by Morten Tønnessen at 12:03 No comments:

A few weeks back, on February 21st, I updated my CV. The 14pp document is available for viewing and download in Scribd (see also my other 41 documents available in Scribd).

The organisers of the 11th Annual Conference of the Nordic Society for Phenomenology, to be held in Copenhagen, Denmark, April 18-20, have published a preliminary program. My paper "Introducing Uexküllian Phenomenology" has been scheduled for presentation on Thursday 18th of April in the session "Phenomenology, Science, and Technology", which is to take place at 15.30-17.15.
Posted by Morten Tønnessen at 11:33 No comments:

Minding Animals Norway, which I chair, is referred to in Tore Fougner's article "Dyr i IP-faget" [Animals in International relations], which is published in the first issue of 2013 of the Norwegian academic journal Internasjonal politikk (pp. 85-97; the mention is made on p. 86). Fougner cites Minding Animals Norway's mission statement as part of a broader presentation of the interdisciplinary field of Human-Animal Studies, where attempts are made to bridge activism and academia.
Posted by Morten Tønnessen at 11:28 No comments:

Last Thursday I attended the board meeting of the University of Stavanger (UiS), the second board meeting this year. Issues discussed included reporting for 2012 and plans for 2013 (to the Ministry of Education and Research, which is the owner of UiS) and development of the study portfolio. In the latter case the university director did not get the board's explicit approval to implement seven measures aiming at centralising the management of the study portfolio (though several of them have broad support and will and should be carried out). I was part of presenting alternative proposals for decisions in both cases; the first, proposed with Fredrik Skår (representative for permanent administrative staff), triggered substantial debate about whether or not the board should prioritise what parameters to pay special attention to, but eventually lost the vote 10 to 1, the second, proposed with Eva Hærem (deputy representative for permanent scientific staff), was eventually withdrawn when rector Marit Boyesen and the university director John Møst took a time-out and then in their revised proposal removed the reference to the seven concrete measures, which included establishing a work group that would make suggestions about what studies to close down.

A Norwegian-language report from the board meeting is available on the UiS webpage, where you'll also find news about a plagiarism case involving a scholar which we also treated at the meeting.
Posted by Morten Tønnessen at 11:18 No comments:

In the days leading up to March 5th I contributed to the research project application "Animals in Changing Environments: Cultural Mediation and Semiotic Analysis", where I am the prospective Principal Investigator of the Norwegian research team, with Tartu's Timo Maran being the Principal Investigator of the Estonian research team, based at University of Tartu's Department of Semiotics. The Norwegian team will, if the application proves successful, include professor Paul Thibault (University of Agder) and Post-Doc Kristin Armstrong Oma (University of Oslo). My head of Department at University of Stavanger has approved my and the university's involvement, and I have met with an economics consultant in the central administration.

The application is due to be submitted by March 14th. More details later.
Posted by Morten Tønnessen at 11:55 No comments:

On March 1st I conducted peer review of 6 abstracts submitted to the Eight Conference of the nordic Association for Semiotic Studies: Sign Evolution on Multiple Time Scales, in capacity of being a member of the conference's Scientific Committee.
Posted by Morten Tønnessen at 11:47 No comments:

In the course of the four days February 26 - March 1st I taught for 15 hours (on campus, IRL) at the University of Stavanger's Department of Health Studies, in the course Examen Philosophicum (introductory philosophy, course code BSNEXP), which partakes in the internet-based bachelor in nursing. This was the second of two "gatherings" this Spring semester.
Posted by Morten Tønnessen at 11:42 No comments:

My author page at Scandinavian Academic Press is now complete with a short bio and a profile picture.

See also Årets forfattere [This year's authors]; and a previous post in this blog, Norwegian HAS anthology; Title, announcement.
Posted by Morten Tønnessen at 11:37 No comments:

Here is a link to my reported publications, public presentations and media appearances in 2012 in CRIStin, the Current Research information System in Norway, altogether 18 entrances - and to my personal profile page (with Tønnessen misspelled 'Tønnesen').

Prior to 2012 I have, due to institutional affiliation (including affiliation to various Estonian research projects), only reported my publications to the Estonian Research information System (ETIS).
Posted by Morten Tønnessen at 10:55 No comments:

The Norwegian Human-Animal Studies collection of articles that I am co-editing with UiO professors in criminology Ragnhild Sollund and Guri Larsen, which is due for publication in April, has been announced on the webpages of the publisher, Spartacus/Scandinavian Academic Press.

Sollund, Ragnhild, Morten Tønnessen and Guri Larsen (eds) 2013. Hvem er villest i landet her? Råskap mot dyr og natur i antropocen, menneskets tidsalder [Who is the wildest one in the country here? /Brutality/ against animals and nature in the Anthropocene, the age of man]. Oslo: Spartacus/Scandinavian Academic Press. 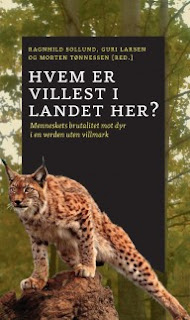 Posted by Morten Tønnessen at 10:41 No comments: