1. ENCOUNTER WITH A PUBLISHER
At the Copenhagen congress on climate change I ran into a publisher from Springer.
- You don't happen to be giving books away for free today, do you? I said, hinting at 'Surviving 1,000 Centuries: Can We Do It?' in the book shelf.
- Of course, said the publisher - if you can tell me about the next book you plan to publish.
I am now preparing a book proposal entitled 'The Growth Crisis: Norwegian Ecophilosophy and the Growth Economy', an idea I originally conceived of in terms of a Norwegian publication only. I am very pleased that Springer shows interest in my work - not least since it has been the publisher of many of the works by Arne Næss and Jakob von Uexküll. In that company - I can feel at home.

2. ENCOUNTERS WITH SCHOLARS
Roger Parent recently visited Semiootika Osakond from Canada. I was there for three classes of his course on The semiotics of cultural conflicts (a course which greatly inspired my wife, who now appears to be just as semiotic as myself). Today I missed out on Martin Walter's lecture on Poinsot, due to some confusion about summer/winter time - but we went for lunch (where I had a delicious ceasar salad).

3. NEW FORMATIONS
I have agreed to submit an article to New Formations' special issue on Imperial Ecologies. My article will address topics of globalization from an ecosemiotic (and largely historical) point of view (with a view to the past as well as to the future), with emphasis of human settlers and the ecology of capitalism.

Posted by Morten Tønnessen at 08:33 No comments:

Petition to include ethical expertise in the IPCC

I have signed a petition to include ethical expertise in the next report from the IPCC.

It is widely acknowledged…
…that ethical questions play a central role in climate science and policy. Most recently, this is evidenced in the key messages resulting from the International Scientific Congress on Climate Change in Copenhagen of March 2009.1 IPCC reports are full of explicit and implicit references to ethical issues, particularly in the context of discussions on sustainability. Important examples include:
- global distributive justice in mitigation and adaptation2
- intergenerational justice, in particular the issue of discounting3
- usefulness of cost-benefit analysis in evaluating climate change4
- the relation of humans to nature and questions regarding the value of biodiversity and natural services5
- value judgements that determine what is to count as a "key" vulnerability and what level of anthropogenic interference with the climate system is to count as "dangerous"6

We observe…
…that in the IPCC assessment reports, ethical questions are not addressed with the same rigour as other questions. The analysis of issues with strong ethical components is not conducted on a comparable level of scientific quality as is the analysis of other issues. It is indicative of this general observation that, for the references given for the examples above, there is an almost complete lack of professional ethicists among the coordinating, lead, and contributing authors.

We observe…
…that by now there is a large and growing literature on climate change written by ethics specialists. The first survey article on climate ethics appeared in the most prominent ethics journal five years ago,7 and bibliographies with relevant literature take up many pages.8

We therefore suggest…
…that a chapter with a general overview of the ethical issues in climate change be included in AR5. Such a chapter should not arrive at specific conclusions regarding the morally "correct" climate policy, but should rather provide an analysis that can support political decision-making and facilitate structured discussion. It should enumerate the approaches available in the state of the art literature as well as portray the most relevant arguments concerning all sides of the debate. Above all, authorities in the field of ethics rather than social or natural scientists should prepare such a chapter. In case a chapter on ethical issues should not become a reality, we urge that, at the very least, in those chapters where ethical issues are expressly addressed, the expertise of professionals in the field of ethics is sought and that such professionals be included in the list of authors.

Posted by Morten Tønnessen at 14:15 No comments:

My "band", The Schopenhauer Experience, now has its own blog. Here you'll find a complete "discography", links to songs and music online etc.

My latest musical work - my first for more than a year - is entitled "No Words This Time". Voice, but no lyrics.

Existentialist electronica is what I now call it ...
Posted by Morten Tønnessen at 08:50 No comments:

I have agreed with Tartu Rahvaülikool (Tartu Folk High School) that I will be offering a course (4 hours per week, 54 hours all in all) in Norwegian this autumn. This will be the first Norwegian course offered at Rahvaülikool ever (all in all they offer courses in 13 languages).
Posted by Morten Tønnessen at 04:45 No comments:

My article 'Umtelt Transitions: Uexküll and Environmental Change' (Biosemiotics 2.1), to appear in paper edition in April, has been assigned page numbers: 47-64.

The abstract of my poster presentation 'The nature view held by environmentalists. Attitudes in the Norwegian environmental establishment' is included in the digital (CD) Abstract Book of the climate conference currently ongoing in Copenhagen, which has been distributed to about 2000 participants.

All abstracts have now been published in the open access journal IOP Conference Series: Earth and Environmental Science, volume 6, 2009. Abstracts are organized by sessions. My session, 'Cultures, Values & World Perspectives as Factors in Responding to Climate Change' (session 57) is to be found here. My contribution, 'The nature view...', is, and will remain, available online at the hyperlink hidden in the apparent depths of these characters.

IOP = Institute of Physics
Posted by Morten Tønnessen at 02:06 No comments:

My poster for the congress Climate Change: Global Risks, Challenges and Decisions 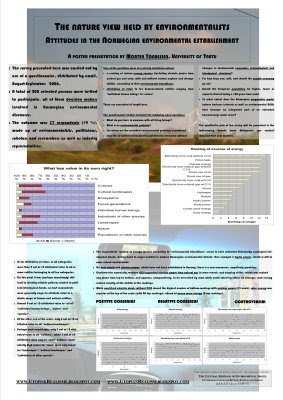 This is the poster that I will be presenting at the congress 'Climate Change: Global Risks, Challenges and Decisions' (Copenhagen, March 10-12, 2009). Entitled 'The Nature View Held by Environmentalists: Attitudes in the Norwegian Environmental Establishment', it presents in some detail the outcome of two of the questions from a survey dating back to 2006 which was carried out among decision makers involved in the Norwegian environmental discourse.

Presented here are the findings on what natural entities - ranging from 'individual human beings' to 'nature' - the respondents attributed value to, plus how they ranked 14 sources of energy according to environmental friendliness.

The poster has also been uploaded to Scribd (word format). So has the abstract, which will be made available to policy makers at December 2009 UN Climate summit, COP15.
Posted by Morten Tønnessen at 01:34 No comments:

The detailed poster programme for the forthcoming scientific conference on climate change, in preparation of the december UN climate summit, is now online.

My contribution, 'The nature view held by environmentalists. Attitudes in the Norwegian environmental establishment', is to be found on page 27.

While there are several presenters from Norway, I appear to be the only representative from Estonia.
Posted by Morten Tønnessen at 10:16 No comments:

I have submitted an article, "Food vs. Nature. How Human Taste has Shaped Nature as We Know It" to a coming special issue of Politics and Culture, on food sovereignty.

This article summarizes the author's views on mankind's systematic discrimination between favored and unfavored life forms throughout human history, with particular emphasis on domesticated animals and plants. In the context of an up-to-date, politically oriented philosophy of nature, two empirical facts should be treated as fundamental: First, that the ecological crisis van be regarded as a global event of environmental change with historical roots in humankind's domestication of animals and plants. Second, that much of the modern loss of biodiversity and ecosystem complexity can be ascribed to man's habit of discriminating between favored and unfavored species, thus superimposing a human hierarchy upon nature. In this article, it is argued that the subject of domestication can be regarded as archetypical for human interaction with the environment, since it exemplifies an attempted taming of nature. Further theoretical developments are outlined, and some implications for food-related politics and activism suggested.