Borth articles are for the forthcoming special issue of Biosemiotics "Semiotics of Perception".
Posted by Morten Tønnessen at 09:07 No comments:

A 48 pp email discussion following Marcello Barbieri's distribution of a paper now entitled "On the origin of language: A synthesis of Biolinguistics and Biosemiotics" has been posted to the blog Biosemiosis. The discussion featured one email from me (plus one email sent to Marcello Barbieri only, which has also been included in the collage). You'll find the post here, and the collage here.
/
All in all the exchange included 79 emails (January 14th - February 6th). These include:
/
2. My general post, sent to all on this biosemiotics email list:

Dear Marcello (and dear All),

I have a few comments/questions to your text (though I have little or nothing to contribute with concerning a general discussion about biolinguistics). First, though, I would like to ask where it will be published (as I would like to quote it in one of my articles-in-process).

2) You claim that "animals do not interpret the world but only representations of the world. Any interpretation, in short, is always exercised on internal models of the environment, never on the environment itself". Sure, perception of "external reality" is always mediated. Nevertheless, "the environment" (in an objective sense) necessarily represents the final/ultimate object of any perception. The percepts are never identical to their final objects - but why stress that they are (fundamentally) different from them? That is trivially true. But related they are. Not even man can take in "reality" unmediated.

3) I find your explanations of how natural selection favors icons and indexes rewarding and interesting - but when you ask: "Why were animals unable to go beyond icons and indexes? Why didn’t they learn to use symbols?" I think you neglect some empirical evidence to the contrary.

4) I also found interesting your observation that in "all other mammals the wiring of the brain takes place almost completely in the dark and protected environment of the uterus, whereas in our species it takes place predominantly outside the uterus, where the body is exposed to the lights, the sounds and the smells of a constantly changing environment." This is clearly a key point.

The first point, on our understanding of interpretation, was a recurring topic in the whole discussion. The third point I made, concerning the use of symbols among animals, made Marcello revise his article on this point, from a claim that animals do not make use of symbols to the much more correct claim that no animal make systematic use of symbols in any way comparable to man (cf. post 5, M.B.).
/
76. My email to Marcello Barbieri:

I have followed this discussion throughout, and realized how frustrating it must have been for you to see how few actually addressed the (new) substance of your article. That was a shame. Hopefully the ideas concerning the origin of language herein will be analysed in much more detail (from both sides of the fence) after your article has been published.

This spring semester I will be taking a course on the philosophy of Michael Polanyi. Unfortunately I had to cancel a course on phenomenology ("History of Philosophy II: from I. Kant to Phenomenological Philosophy"), due to linguistic difficulties.
Posted by Morten Tønnessen at 03:44 No comments:

Invitation to Sydney workshop on ethology

I have just read an email by Matthew Chrulew, a scholar (and writer) based in Sydney and partaking in the Australian Ecological humanities network. He is in the process of organizing a workshop entitled 'The history and philosophy of ethology', and invites me to participate, given that an application for funding proves successful. I would very much like to see this materialise.
Posted by Morten Tønnessen at 09:00 No comments:

The zoosemiotics special issue of Sign Systems Studies (no. 37.3/4) has now appeared (or, rather, been referred to) on its homepage. A complete list of contents is to be found here.

I have scheduled a visit to PolarZoo, in Bardu, Northern Norway, March 8-11th. My contact is Stig Sletten, the primary animal caretaker.
/
PolarZoo, which claims to be "the world's Northernmost zoological park", is one of three (public) places in Norway with captive wolves. At PolarZoo some of them are so tame that they have physical contact with caretakers and some guests.
/
Later this year I will also visit Langedrag Naturpark, plus revisit Kristiansand zoo.
/
Remarkably, my visit to PolarZoo in March will actually be my first visit ever to Northern Norway! By car, it's 1.785 km from where I am currently sitting making these plans (I will go by plane from Oslo to Bardufoss, an hour's drive away).
Posted by Morten Tønnessen at 07:23 No comments:

Call for papers: Semiotics of nature

Hortus Semioticus has published a call for papers concerning our special issue 'Semiotics of nature', for which I am one of the guest editors. Instructions for authors are found here.

CALL FOR PAPERS: SPECIAL ISSUE ON THE SEMIOTICS OF
NATURE
Guest editors: Riin Magnus, Nelly Mäekivi and Morten Tønnessen
/
Hortus Semioticus is an online academic journal of semiotics - the study of signs and sign processes. In Tartu, Estonia, where the student journal is based, nature has long accompanied culture as a topic for semiotic inquiry (cf. the fields known as biosemiotics, ecosemiotics, and zoosemiotics). The driving force behind the journal is curiosity and the joy of inquiry.
/
Around the summer of 2010 the journal will publish a special issue on the semiotics of nature (meaning living nature, rather than physical nature). We are inviting papers on the topics of meaning, value, communication, signification, representation, and cognition in and of nature (ranging from the cellular level to the global scene). We encourage originality within a scientific framework which emphazises the semiotic aspects of the life processes alluded to above. Not least, we strongly welcome submissions from other fields (besides, beyond or beneath semiotics). Graduate students and young scholars are particularly encouraged to submit.
/
Contributions (5-20 pages) should be written in English or Estonian and sent to the guest editors by May 1st, 2010. Prior to that we're expecting an abstract (100-200 words) plus 3-5 keywords by April 1 2010. Please find further instructions attached.
/
Please submit your proposal to the guest editors: riin.magnus@gmail.com (Riin Magnus), nellymaekivi@gmail.com (Nelly Mäekivi) and mortentoennessen@gmail.com (Morten Tønnessen)

Posted by Morten Tønnessen at 11:34 No comments: 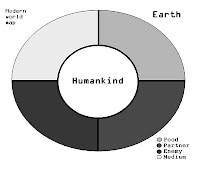 The second last night I further finished my article "Mapping human impact - Expanding horizons: Interdisciplinary integration" (17pp) where, for one thing, I criticise the ecological footprint concept.
/
The article will partake in proceedings from the second CECT autumn conference, and is in part based on my presentation there. Proceedings will likely appear in Geografiska annalar, published by the Swedish Society for Anthropology and Geography.
Contents:
Ecological footprint vs. ontological niche
Interpreting numerical data qualitatively
Development of ontological maps
Posted by Morten Tønnessen at 11:25 No comments:

The second last night (literally) I finished revising my article "The global species" for the journal New formations. Three pages were added, not least addressing global disparities.
Posted by Morten Tønnessen at 11:20 No comments:

Today in Filosofisk Forum the topic was philosophical consultations (filosofiske samtaler). Here's a collection of relevant papers, about the methodologies in question. While today a group conversation w/facilitator-method was applied, a session on March 2nd will feature me in the role as a facilitator critically questioning fellow philosopher Håvard Løkke (there's also sessions February 16th and not least (a public one, out of are university-wise) March 16th).
/
The session is entitled 'To filosofiske samtaler (hardcore)' [Two philosophical consultations (hardcore)]. I will see whether I can get inspired beforehand by the work of enfant terrible Oscar Brenifier.
Posted by Morten Tønnessen at 11:15 No comments: