Letter to the editor in Norwegian daily Dagbladet: "Aren't animals among society's weakest?"

Today a letter to the editor by me is published in the Norwegian daily Dagbladet, which is Norway's third biggest newspaper. The whole text, entitled "Er ikke dyr blant samfunnets svakeste?" [Aren't animals among society's weakest?] is posted in my Norwegian language blog Utopisk Realisme. The letter to the editor is written in response to a commentary article published yesterday, entitled "I bås og samfunn" [In cubicle and society] and written by Dagbladet's staff journalist Gudleiv Forr. Forr comments on the special issue of the Norwegian academic journal Sosiologi idag, "Dyr i samfunnet" [Animals in society], where I contribute with a book review of Ulvekonflikter [Wolf conflicts], written by three sociologists. Forr basically claims that sociologists should not waste their time on animals, but be occupied only with improving conditions for human beings, as they used to. 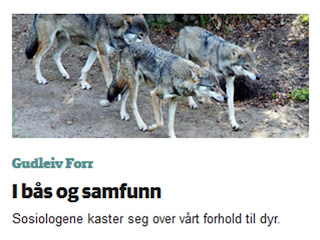 My letter to the editor is signed M.T., Chair of Minding Animals Norway and Associate professor in philosophy at University of Stavanger.